The third panel at the European Film Forum was held during the second day of the event (read the news), which took place in Brussels from 1-2 December, and was entitled “It’s All About Access, Fostering the Exploitation of EU Works”, featuring panelists Christophe Tardieu, director general of the Centre National du Cinéma, Lauri Kivinen, CEO of YLE Finland, Tom Van Waveren, CEO and creative director at Cake Entertainment, and Filmin and EuroVoD’s Jaume Ripoll. It delved into the Commission’s agenda to both modernise the EU copyright framework for the benefit of all stakeholders, and support the enhanced availability and visibility of European content, including across borders.

The idea of a platform

Jaume Ripoll talked about his experience with the Filmin platform, which has reached 1.8 million views only with European films, and remarked that the hardest aspect of video-on-demand services is dealing with sales agents. He asserted that existing platforms like Netflix and Amazon “don’t care about 90% of European cinema” and that, as a consequence, “those films need to find their audience elsewhere”.

When considering the idea of a common platform that promoted European content, Lauri Kivinen stressed the importance of the fact that it should be a “public platform that offers free content available for European citizens”. Tom Van Waveren highlighted the need for “windowing within existing and new platforms (...) which could amplify the success of European works”, because, as he optimistically stated, “Every time we add a platform service in the market, it increases everybody’s viewership.”

But the same year, the use of Netflix was on the rise in the UK, where overall, 58% of UK broadband-connected households used a video streaming service or player.

The expansion in the use of platforms like Amazon and HBO in Europe is no longer a secret. Streaming platforms are a good idea, and this is well known to European competitors and foreign ones. Netflix, for instance, is a clear example of this (as shown in the graphic below, shared by Netflix itself): 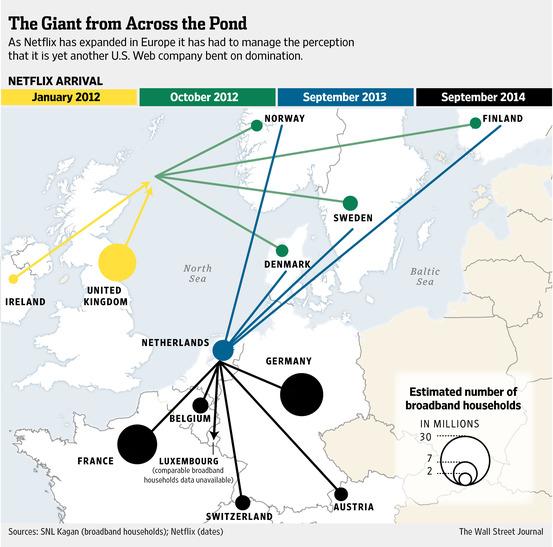 The European Commission has proposed one legislative initiative and financial support measures to help the audiovisual industry adapt to the new digital environment and reach out to more audiences across borders. Christophe Tardieu underlined the risks of piracy within the current distribution system of European cinema, a problem that needs to be addressed with “pedagogy and a proper legislation that helps European films to travel more easily”.

Van Waveren stressed the fact that a helpful legislation for European cinema must not overlook “curation and must keep an eye permanently on diversity”, and Ripoll contributed to the legislation topic by saying that having only a model whereby viewers subscribe to a platform “would lead to a failing business model that won’t be able to finance films with today's legislation trammels”.

The new legislation proposal focuses on the fact that the audiovisual media landscape is changing at a rapid pace owing to ever-increasing convergence between television and services distributed online. Consumers increasingly access on-demand content through smart/connected TVs and different portable devices. Young consumers, particularly, watch videos, including user-generated content, on the internet and through those new technologies.

Traditional broadcasting in the European Union remains strong in terms of viewership, advertising revenues and investment in content (around 30% of revenues). However, new business models are emerging. Broadcasters are extending their activities online, and new players offering audiovisual content online (HBO, Netflix and Amazon) are getting stronger and competing for the same audiences. However, TV broadcasting, video-on-demand and user-generated content are subject to different rules and varying levels of consumer protection.

The Digital Single Market (DSM) strategy for Europe calls for a modernisation of the Audiovisual Media Services Directive (AVMSD) to reflect these market, consumption and technological changes. It requires the Commission to focus on the scope of application of the AVMSD and on the nature of the rules applicable to all market players (in particular those for the promotion of European works), consistency with existing policy provisions in the policy area, with other Union policies (such as those on the e-Commerce Directive, on advertising and sponsorship of tobacco products, on unfair commercial practices, on consumer protection, or on combating the sexual abuse and sexual exploitation of children and child pornography) and with the obligations of international law, and a basis on the principles of subsidiarity (for non-exclusive competence), proportionality, choice of instrument (and protection of minors), stakeholder consultations, collection and use of expertise, impact assessment, regulatory fitness and simplification, and budgetary implications, all of which are missing in the current legislative framework.

Critique : You Won’t Be Alone